Countdown for Most Dangerous Active Volcanoes in the World

Begin with the countdown to know Top 10 Most Dangerous Active Volcanoes in the World. The list is being kept in the Category, Top 10 of our website. The categories also having other Top 10 interesting things so after this post, do check them out. This volcano in Hawaii has been active for 700,000 years or more. Occasionally the lava flows from the volcano are fast and pose a risk to nearby towns and villages, thankfully many of the eruptions are slow. Its proximity to Manila makes it an ongoing threat to over 1.6 million inhabitants. This volcano is located on the island of Luzon in the center of Lake Taal. Since 1572, the volcano has erupted 33 times. Many tourists visit the volcanic island each year and it is recommended that visitors view Taal from a distance. Since the 1700s, there have been 22 major eruptions recorded, and they regularly observe minor eruptions on an ongoing basis (as reported by nearby residents). His is one of the most active volcanoes in the world. The structural integrity of Ulawun is questionable. The resulting eruption could herald destruction across hundreds of square kilometers, if a major collapse occurs. The Lava flows traveling at 60 mph destroyed nearby villages, killing and injuring thousands. 147 people died in an eruption as recent as 2002, and another 120,000 lost their homes. 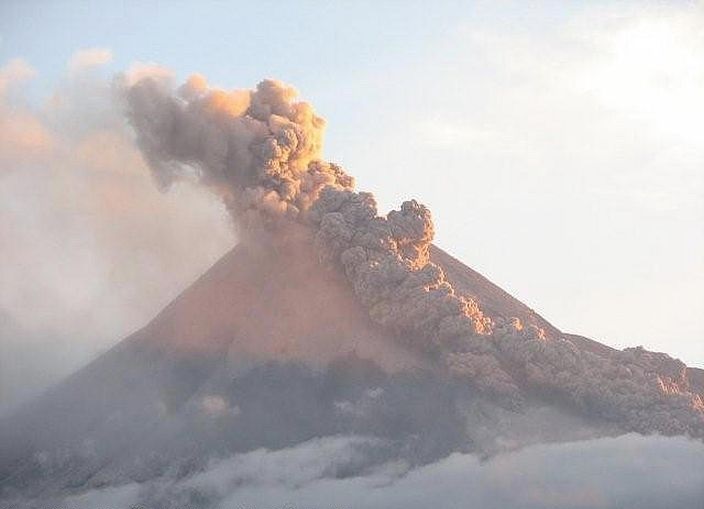 It is the most active volcano in the world, if measured in terms of flow alone. It has been active at least 10,000 years. It is Indonesia’s most active volcano, and it has produced a record amount of lava flow. The name of this mountain means “Mountain of Fire.” A 2010 eruption killed 353 people and left 320,000 more without homes. Scientists estimate the volcano has been erupting for one million years or more. This volcano near the border of Ecuador erupts frequently and has been active an impressively long time. The first recorded eruption was in 1580. Galeras went temporarily dormant between 1978 and 1988. It has behaved ominously, erupting almost every year since the turn of the millennium. Sakurajima produces thousands of small eruptions each year. A reference to its high level of activity, Sakurajima is known as the “Vesuvius of the East,” on the list of active volcanoes. It used to be separate from the mainland of Japan. If a major eruption occurs, 700,000 residents in the city of Kagoshima will be in immediate danger. Popocatepetl is one of the most dangerous volcanoes on the planet as well as one of the most active. The volcano erupted most recently in 2000. Forty-one thousand people would have been in danger of losing their lives if they had not been evacuated in time. This volcano is just 35 miles away from Mexico City. Nine million people live within the blast radius. One of the most famous volcanoes on the planet is Mt. Vesuvius. The famous, catastrophic eruption in 79 AD destroyed the cities of Pompeii and Herculaneum. Vesuvius has an eruption cycle of roughly every 20 years and the last eruption was in 1944. This is another volcano which poses a serious risk to an incredible number of people. Three million people are located not only within the blast radius, but close to the crater.

The national park’s active volcanic caldera attracts three million visitors per year. Yellowstone is a super volcano. It’s hot springs and geysers are beautiful to behold, but they are also potentially deadly. The last known major eruption of a super volcano happened in Yellowstone 640,000 years ago. It is estimated that 87,000 people would be killed instantly, if Yellowstone were to blow. Due to the eruption, the entire western USA would be devastated. Other than this, the ash would also impact ecology and human health throughout the country and the world.

Source of Top 10 Most Dangerous Active Volcanoes in the World

The source used to write the article “Top 10 Most Dangerous Active Volcanoes in the World” is given at the end. All the images are taken from different sources. Do share the post for the people to know about these dangerous active volcanoes in the world.

Also Watch: Top 10 Most Powerful Militaries in the World